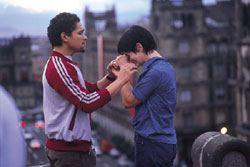 The HIFF is proud to present the World Premiere of Writer/Director Richard Shepard's latest film MEXICO CITY. Shepard takes us into the underbelly of one of the most dangerous places in the world in this dramatic thriller filled with excellent performances, beautiful photography and undeniable tension. MEXICO CITY stars Stacy Edwards ("Chicago Hope", IN THE COMPANY OF MEN) and Robert Patrick (TERMINATOR 2). Ms. Mitch Cobb is suffering from a personal tragedy and heads down south with her brother to escape her troubled life. When she awakes to find her brother missing, she quickly realizes her problems have just started. She doesn't speak the language and doesn't know her way around. The police are no help, nor is web.  With the help of a taxi driver (in an excellent performance by newcomer Jorge Robles), she sets off to search for her brother and uncovers much more than she bargained for. MEXICO CITY is a stylish, intelligent thriller.

Richard Shepard's diary on the making of MEXICO CITY (Oct/Nov 1999):

Notes from Mexico City - Week One 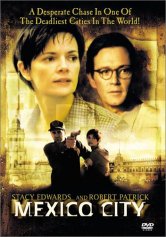 MEXICO CITY is available on VHS and DVD. The DVD (Region 1) released in North America by Dimension Entertainment features: