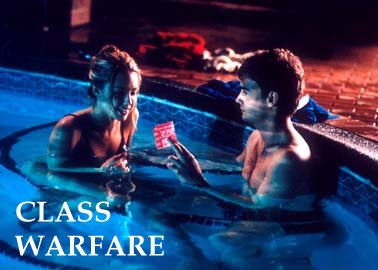 CLASS WARFARE (2001), directed by Richard Shepard and written by George Finch, premiered on the USA Network on June 26, 2001. In this thriller, Kristen and Jason (Lindsey McKeon and Wade Carpenter), a privileged and popular high school couple, discover that their families have lost their collective fortunes. When a less affluent classmate, Richard (Robin Dunne), reveals his possession of a winning lottery ticket during a weekend retreat, Kristen becomes determined to get her hands on it by any means necessary.

Click on the photo to the right for more images from the film.

THE ROYALE (1996) aired as a one-hour special on American Movie Classics (AMC). The program, set in an old-time movie theatre, was nominated for three Daytime Emmy Awards, including Best Children's Special.

Richard Shepard directed a script by Bruce Harmon. THE ROYALE also marks one of his many collaborations with producer Jonathan Stern and composer Rolfe Kent. Actors that appeared in the film included Arden Myrin and Rose Marie.

Shepard continued his affiliation with AMC by directing several episodes of their nostalgic comedy series REMEMBER WENN (1996-98), set behind-the-scenes at a radio station. Here is a list of episodes that he helmed:

All the information you could possibly want about the show is available at Linda Young's Remember WENN Website. 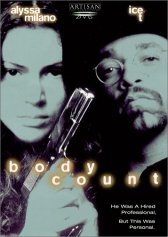 In BODY COUNT (1998 a.k.a. BELOW UTOPIA), a young man (Justin Theroux) brings his girlfriend (Alyssa Milano) home for the holidays and introduces her to his dysfunctional family. Things take a frightening turn when the family is massacred by a group of thieves (led by Ice-T) and the surviving couple must find a way to escape the house without becoming victims themselves.

Richard Shepard is credited with the story, along with fellow writer David Diamond, who is credited with writing the screenplay. Kurt Voss directed the movie, which is available widely on video and DVD.

INSIDE OUT (1992) is a series of short films released in volumes by Playboy. Richard Shepard directed two shorts, "My Better Half" (on Vol. 1) and "Three on a Match" (on Vol. 4), which he also helped write. Other notable folks who wrote and/or directed segments of the series include Alexander Payne (Sideways, About Schmidt) and Antoine Fuqua (Training Day). The series' producer, Alan Poul, now produces HBO's Six Feet Under. Shepard worked with at least two regular collaborators on "Three on a Match"; actor Phil Brock would later play Agent Kline in MERCY, and Mark Mullin, co-writer of "Three on a Match," shared writing and directing duties on COOL BLUE. Every volume of INSIDE OUT is available on video and DVD.

COOL BLUE (1988) was written and directed by Richard Shepard and Mark Mullin. It tells the story of a struggling artist (Woody Harrelson) and his search for an enigmatic woman (Ely Pouget) who enters and leaves his life before he can properly reflect on the matter.

COOL BLUE is not exactly a career highlight of Shepard's, but he and Mullin were a mere 22 years old when they made the film, so try not to hold it against them. The video is currently out of print, although it's not impossible to find used or as a rental.

Back: The Films of Richard Shepard